So This Is Why Takeoff Wasn't With The Migos At The AMA's?! #JuiceWithJulezz - Power 98.3

Last night, Offset and Quavo accepted the award Favorite Duo/Group in the Pop/Rock category, but Takeoff was nowhere in sight. This is the second award show in a row where Takeoff wasn’t in attendance, following the VMA’s. However, it turns out that Takeoff was just busy in the studio!

Offset’s mother, Latabia Woodward, explained why Takeoff wasn’t alongside Offset and Quavo during the AMA’s to accept the award for Favorite Duo/Group in the Pop/Rock category. In a social media comment, Woodward reportedly said that Takeoff is getting ready to release his solo album after Quavo and he’s been steadily grinding away in the studio.

“It’s still 3 of them. Take is working on his solo album which releases soon after Quavo’s. Each of them are releasing solo projects,” Woodward replied to a fan who questioned why Takeoff wasn’t with the other two members of the group. 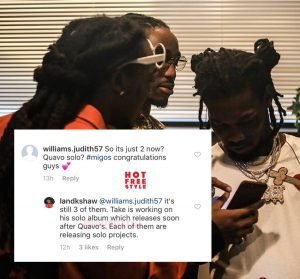