SOOOO Amber Rose posted a selfie with Wiz saying “STILL BALLIN” with a lovey-eyes emoji face! Could they be back together? She’s definitely forgiven him for HIS offenses! 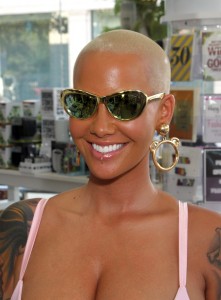 Amber Rose took a moment at her first-ever SlutWalk in Los Angeles on Saturday to forgive exes Kanye West and Wiz Khalifa.

Billboard reports that Rose was delivering an emotional speech about the incidents in her life that inspired her to organize the event, including Kanye commenting that he “needed 30 showers“ after being with her and Wiz rapping that she was “nothing but a stripper.“

The model declared that she was ready to move on. “I want to let all the negativity go,“ she declared.

“People are ignorant and you have to be the bigger person and…move on and help other people around you that have been through the same thing.”

Agreed on that. I would love to see her and Wiz back together. They were so cute!