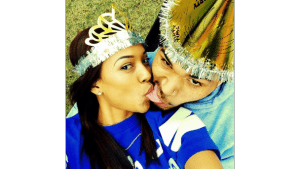 The two officially broke up…and Koochie’s camp said it was because Chris never stopped partying and that the LAST STRAW came when Chris supposedly liked two pic on Instagram of him and Rihanna.

So Chris’ story is this: he found out that Karrueche was texting other guys (pics and all!) while they were together. Also he never liked the fact that Karrueche would do interviews about her fashion line and talk about their relationship. He apparently dumped her because he felt like she was an “opportunist.”

So—two VERY different stories. Who do you think is telling the truth here?