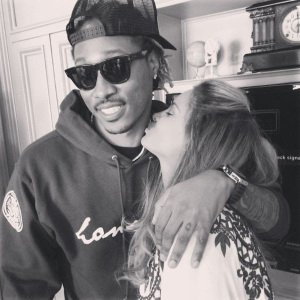 For the last couple of months, Ciara and Future have NOT been spotted together…despite the fact that she was pregnant with their baby. NOW they have baby Future….and haven’t been seen together either. Rumors were circling that the two split up and now US WEEKLY has confirmed that the two are O-V-E-R!!!!

According to the magazine, they called off their 10 month engagement and two year relationship. TMZ is reporting that Ciara will go for custody of their son.

I think it is BEYOND messed up to leave a woman while she’s pregnant or soon after she has your child. But I guess what should we expect from someone with 5 baby mamas?!?! a zebra doesn’t change its stripes.

Last month, Ciara was on the cover of Brides Magazine and there seems to have been a few SIGNS that something was going wrong:

With love, I was kinda like, ‘You know what? I’m gonna really close that door off and if something hits me then it just has to hit me.’