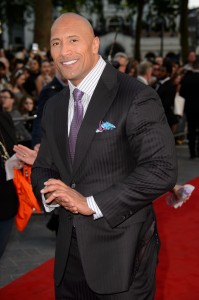 Dwayne Johnson shared some sad news on Instagram yesterday: He was forced to put his dog Brutus to sleep after the dog ingested a toxic mushroom.

“Another reminder we have to live and love as greatly as we can today, because tomorrow is never guaranteed,“ Johnson wrote alongside a photo of him cradling the French bulldog in his arms.

“At approximately 11:15 p.m. last night, myself and [girlfriend] Lauren Hashian had to make the painful decision to end Brutus’ suffering.“ Johnson first mentioned Brutus’ illness on Instagram about two weeks ago, which happened after he randomly ate a mushroom while playing outside.

The Rock Had To Put One Of His Puppies To Sleep After It Ate A Poisonous Mushroom: http://www.buzzfeed.com/juliegerstein/one-of-the-rocks-precious-puppies-died-after-eating-a-poison#.arDPMb5D9