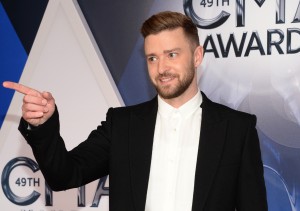 Video has emerged of Justin Timberlake making a drunk and hilarious exit from Chris Stapleton’s concert in Los Angeles on Monday night.

The singer scolds the paparazzi as they scramble to get his photo. “I gave you guys shots before I walked in,“ he slurs in the clip. “If you’re too lazy to be paparazzi that gets the shots when I got in, that’s on you.”

The obviously faded Timberlake is then helped into a waiting vehicle. Leave it to J.T. to still manage to come off charismatic when he’s wasted.