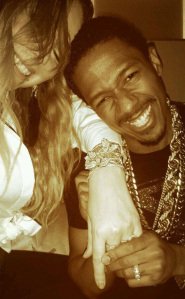 Yesterday we heard the rumors about the Mariah Carey and Nick Cannon split…and now we have the CONFIRMATION from Nick that the relationship is pretty much over.

He told The Insider With Yahoo yesterday “There is trouble in paradise. We have been living in separate houses for a few months. My main focus is my kids.”

They have 3 year old twins Monroe and Moroccan. Apparently the straw that broke the camel’s back was a conversation that Nick had in a radio interview about the fact that he hooked up with Kim Kardashian.

Is it disrespectful to talk about your past hookups when you’re a married man?? I think so.

NOW TMZ is reporting that Mariah gave Nick a gag order! He’s not allowed to talk about the divorce at ALL–only SHE is allowed to do so. TMZ also reported that the divorce HAS been finalized and that custody has already been settled, too.