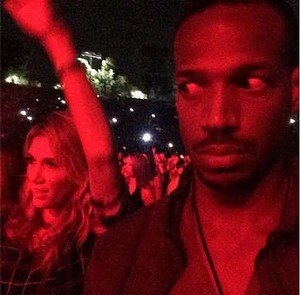 ALRIGHT so people are upset at Marlon Wayans today!!! Why?! Because he was at the Beyoncé and JAY Z “ON THE RUN TOUR” concert and he posted THIS pic with the caption:

“Man I got the most UNRHYTHMIC WHITE WOMAN dancing next to me at the jay and bay concert… This (b****) dancing to AC/DC.”

The woman just so happens to be Delta Goodrem….a singer that he CLEARLY didn’t recognize–I guess it’s been a while since she had a name in the business, really. NOT THE POINT—the point is a LOT of people are PISSED because he made fun of a “white woman” and if it were the OTHER WAY AROUND a white MAN making fun a of black GIRL it would be a HUGE PROBLEM/racist etc.

Marlon Tweeted:
“Ok first let me start by saying suck it long, hard and til y’all mouths hurt to all these sensitive ass people.”
“Secondly, I ain’t apologizing for a joke…”
“Third… She still can’t dance. Now go covered someone who is correctable and actually gives a f***. Peace.”

Do you think it was WRONG of him to say that?? Would it be a different story if it were the other way around???