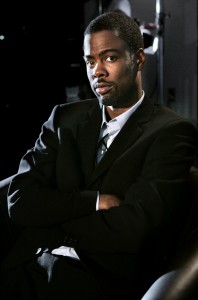 Chris Rock served as host of the 88th Academy Awards last night, where he addressed the #OscarsSoWhite controversy head-on and without apology. After noting that he saw “at least 15 black people” in the ceremony’s opening montage, Rock proceeded to explain that Hollywood is “sorority racist.”

“It’s like [the Academy says], ‘We like you, Rhonda. But you’re not a Kappa.” He also discussed Will and Jada Pinkett Smith’s boycott of the event, joking that Jada wasn’t even invited. “Jada boycotting the Oscars is like me boycotting Rihanna’s panties,“ Rock noted. “I wasn’t invited.” Rock also gave a shoutout to overlooked Creed star Michael B. Jordan and ended the show by telling the audience, “I want to invite everyone here to the BET Awards this summer.“

Chris Rock Addresses Diversity Controversy During Oscars Monologue: ’If They Nominated Hosts, I Wouldn’t Get This Job!’: http://www.etonline.com/news/183340_chris_rock_addresses_diversity_controversy_during_oscars_monologue/