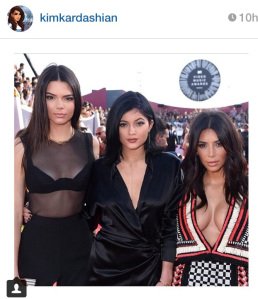 The Kardashians are used to cameras being around-and acting right in front of them OR ELSE. Well, I think they forgot. Last night, Kendal, Kylie & Kim were at the VMA’s and I guess they forgot it was a TELEVISED event because right in the middle of a moment of silence/tribute to Michael Brown (by rapper Common) the camera caught them ALL on their phones!

Social media was outraged!!!! Everyone pretty much agreed it was EXTREMELY disrespectful that they would do that…especially when everyone else seemed to be having an emotional moment.