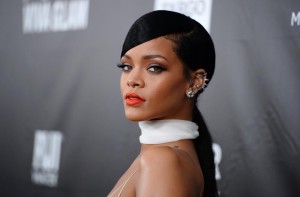 No #SquadGoals for Rihanna: In a new interview with NME, RiRi firmly states that she has no interest whatsoever in being one of the many celebs making cameo appearances on Taylor Swift’s 1989 world tour.

When asked about duetting onstage with Swift, Rihanna replied, “I don’t think I would. I just don’t think it makes sense.“ She went on to state that she and Swift pretty much have nothing in common.