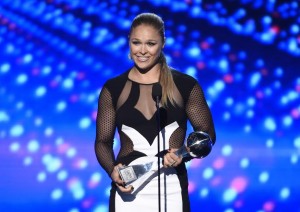 Ronda Rousey told TMZ yesterday that she’ll attend an upcoming Marine Ball with a soldier whose videotaped invitation asking her to be his date had gone viral.

“I’ll go for sure,“ Rousey told a TMZ videographer yesterday about Jarred Haschert’s invitation. “He’s cute. I saw a screen shot of it and thought, ’I can’t go anyway because I’ll be in camp. But now I can actually go.“ Rousey added that she has just one request: Haschert has to find dates for her MMA friends Shayna Baszler, Jessamyn Duke and Marina Shafir.