Twitter Has a FIELD DAY With The Donald's #AskTrump Invitation lol - Power 98.3 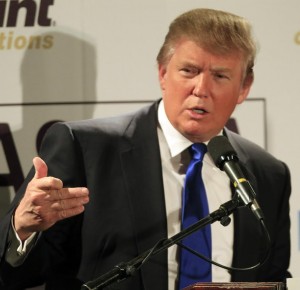 Early yesterday morning, Donald Trump took to Twitter and typed, “#AskTrump Send me your questions to answer live from @TwitterNYC later this afternoon.“

And with that missive, the Internet was set ablaze, with #AskTrump becoming a trending topic and very few interrogators seeking insight into the Republican zillionaire’s foreign policy expertise.

Following are 10 of the funniest questions filed under the #AskTrump hashtag:

“Is it true that if you say Donald Trump three times in the bathroom mirror, the hair in the drain will rise up to shout racial slurs?“

“Are you going to build a wall on the Canadian border to keep out Nickelback?“

“Have you ever killed anything besides your wives’ libido?“

“Do you have a dream that one day men will not be judged by the style of their hair, but by the content of their character?”

“Can we get rid of you instead of immigrants?“

“Which do you consider better represents your record as a winner, the multiple divorces or the multiple bankruptcies?“

“If you build a wall to keep Mexicans out of the U.S., how will you get your suits into the country?“

“How much wood could a woodchuck chuck if a woodchuck wasn’t a loud, xenophobic, morally bankrupt blowhard?“

“Is there anything Meek Mill could do to come back & what advice do you have for him?“

28 Tweets That Prove #AskTrump Was The Hilarious Miracle We All Needed Today | Thought Catalog: http://thoughtcatalog.com/johanna-mort/2015/09/28-tweets-that-prove-asktrump-was-the-hilarious-miracle-we-all-needed-today/?utm_content=buffer4f613&utm_medium=social&utm_source=twitter.com&utm_campaign=buffer